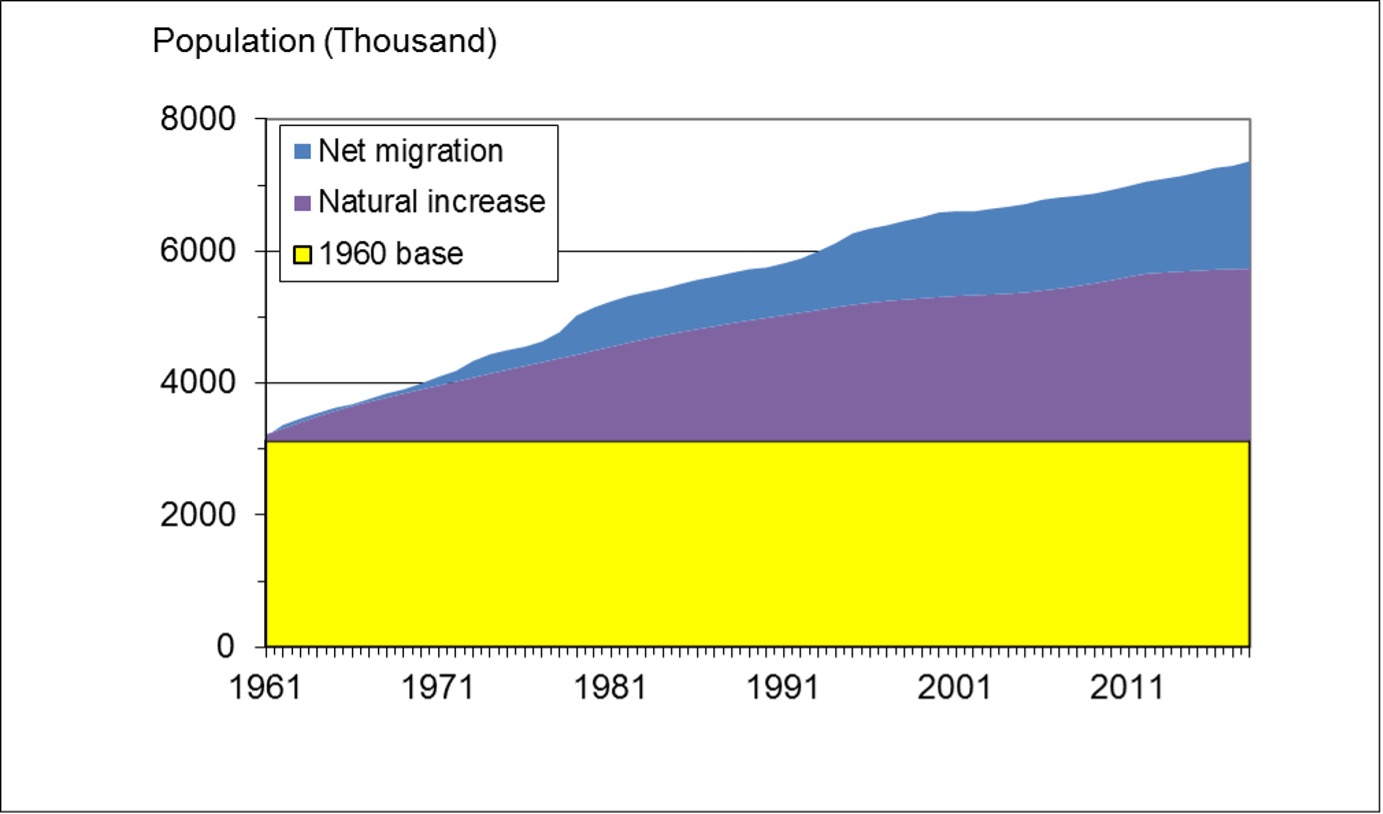 Prof. Shen sought to understand fertility decline and population ageing in Hong Kong. Hong Kong’s population is ageing because of its high life expectancy and low fertility rate. In 2016, Hong Kong had the highest life expectancy (over 81 years) in the world. In contrast, total fertility rate (TFR) declined from 3.459 in 1971 to 2.047 in 1980 and 1.072 in 2018. Most couples in Hong Kong choose to have no more than two children, because of social development, changes in lifestyle and rising cost of raising children. As a result, the percentage of population aged 65+ will increase from 16.6% in 2016 to 36.6% by 2066.

In summary, Prof. Shen’s research responded to the low fertility rate and high life expectancy in Hong Kong, which together constitute a threat to economic development, labour supply, and social well-being. He analyzed demographic trends and identified the demographic conditions that were necessary to achieve a stationary population in Hong Kong.

To inform the public and the government on the population challenges in Hong Kong, evidence-based population policy recommendations and commentaries are published in popular newspapers such as The Hong Kong Economic Journal (19 November 2012 and 26 October 2013). In these articles, Prof. Shen made the following recommendations to address Hong Kong’s demographic changes and their attendant social and economic challenges: (a) maintain a total fertility rate that would sustain a stationary population, (b) strengthen the child support system (e.g. child allowance) to incentivize child bearing, (c) absorb certain number of migrants to increase population size, (d) extend the retirement age to maintain labour supply, (e) increase personal and family savings to maintain citizens’ standard of living after retirement, and (f) raise MPF contributions to help elderly save for retirement.

His analysis has attracted much public attention. In 2012, the HKSAR Government set up a new Steering Committee on Population Policy (SCPP) to recommend population policies to deal with demographic challenges. Recognizing his expertise on population issues in Hong Kong, Prof. Shen was appointed as a SCPP member for the period from December 2012 to November 2014, contributing directly to population policy formation in the HKSAR Government. The SCPP prepared “Public Engagement Exercise on Population Policy: The Consultation Document” in 2013. The consultation document provided the background for the policy debates in 2013-2014. SCPP’s key population measures were announced by the Chief Executive in his 2015 Policy Address: “The SCPP decided to deploy a five-pronged strategy to address the new challenges brought by demographic changes”. A policy report “Population Policy – Strategies and Initiatives” was compiled following a public engagement exercise and research carried out in 2013 and 2014 by SCPP, and released by Chief Secretary for Administration’s Office in 2015.

Effective implementation of population policies requires public support, which is predicated on (a) public awareness of the policies’ underlying issues and implications, and (b) consensus on the role of these policies in community development. Prof. Shen’s research and public engagement effort has contributed to both public awareness and consensus building. Aside from his published analyses and policy recommendations in the Hong Kong Economic Journal, SHEN also gave media interviews on population policy to the Standard and AM730. Prof. Shen was also invited by The Better Hong Kong Foundation and other organizations to share his expert views on urban development, population and transport in various meetings and seminars. These efforts had improved the public’s understanding of population issues and policies.

The innovative models of spatiotemporal analytics (STA) developed by Prof. Bo Huang and Prof. Tung Fung have improved the quality of urban and environmental monitoring. STA’s professional data products and analytical models for business agencies had benefitted many stakeholders in cities/regions worldwide, assisting governmental and intergovernmental organizations in urban management and planning. In addition, the crowd-sourced air-quality App TouchAir developed from the research had facilitated ubiquitous monitoring of air pollution for the public. This research will continue to contribute to sustainable urban management worldwide.

The STA research aims to develop advanced spatiotemporal analytical models for monitoring and modeling urban and environmental phenomena, such as land use, urban heat islands and air pollution, particularly their changes over space and time. The research integrates geographic information science with statistics and artificial intelligence into a unified framework of spatiotemporal analytics (STA), which provides a solid scientific foundation for a wide spectrum of urban and environmental applications.

The value of STA lies in providing an integrated framework for change detection, analysis, and prediction. At the core of their STA framework is a combination of Unified Satellite Image Fusion (USIF) and Geographically and Temporally Weighted Regression (GTWR). To elaborate, USIF applies spatiotemporal contextual fusion to generate time-series images with a high “Spatial- Temporal-Spectral-Angular” resolution to capture complex structures and changes in dynamic circumstances. USIF sensibly blends remote sensing images from multiple satellite sensors into data-rich “piped image cubes”. These image cubes can facilitate the monitoring of urban and environmental changes, such as urban heat islands and urban sprawl, in a more detailed and continuous manner. As a distinctive scientific contribution, USIF, grounded in compressed sensing theory and spatial un-mixing, enables the achievement of two conflicting but desirable properties of satellite imagery: (a) greater spatial detail and (b) greater “timeliness”. GTWR is another focal STA technique that produces reliable and accurate results from local spatial and temporal volatility in the prediction of a dynamic distribution, e.g., air pollution concentrations. It is a refined statistical tool for both spatial and temporal non-stationarity modeling.

STA capitalize on the abundance of geospatial data in the digital age to enable remote sensing from a few meters to hundreds of kilometers above the Earth, as well as in situ observations at and below the surface and in the atmosphere. Specifically, the use of multiple sensors to obtain geo-observations has led to exponential increase of geospatial data at multiple spatial and temporal resolutions available for urban and environmental change monitoring. By breaking new grounds in (a) spatiotemporal data fusion and (b) spatiotemporal data modeling and prediction, STA allows researchers to answer questions about how spatial change evolves over time, and how such change varies geographically – thereby advancing understanding of urban and environmental problems.

Aside from being a pioneering theoretical and data analytic framework, STA has been used to develop products and practical tools that had many impactful applications. As such, its non-academic impact has been both deep and far-reaching. Between 2013 and 2019, many organizations and individuals had benefited from the products developed from STA research. In this section, we use a few examples to illustrate the research and significance of STA for business agencies, governmental and inter-governmental institutions, and the public.

Changes in land use and waste heat generated by energy usage in an urban or metropolitan area can lead to significantly higher temperature in the urban region than its surrounding suburban areas, creating a heat island. Heat islands may in turn contribute to global warming. The need to monitor weekly heat waves is useful for government to formulate land use, energy and other pertinent policies. A Japanese company was able to produce weekly heat wave monitoring reports at a fine scale for the local government because it had incorporated USIF techniques into its urban heat island monitoring business. According to the Company’s CEO, “Using the technology provided by Prof. HUANG, we can monitor our city at both a dense temporal resolution (each week) and a high spatial resolution (15 m)”. This level of precision was not attainable using other remote sensing technologies.

STA had also been used by the Shenzhen Government in the assessment of real estate prices. The use of GTWR in property price assessment had increased the accuracy of the assessment, and hence allowed assessment prices to fall into a narrower and more reliable range. HUANG’s research had enhanced their ability to track spatially and temporally sensitive house prices by identifying hot spots. The Government could then consider this information when formulating guidelines on the management of an overheated market.

In 2015, to create a comprehensive land use plan of Nansha that prioritized ecological conservation and resilience to typhoon-induced flooding, the Urban Plan-Making Center in the District Planning Department adopted STA techniques to generate high-quality time-series geoscientific assimilation data and develop a scientific method of evaluating resilience planning. By taking heed of local resilience to typhoon disasters in urban land use planning, this STA-informed suggestions of the resilience plan had significantly reduced the damage cost of typhoons since 2017.

Air pollution is a major economic and health hazard in China. The annual economic costs of air pollution in China was estimated to be RMB 267 billion (US$38 billion) in the form of early deaths and lost food production, according to a CUHK study published in Environmental Research Letters in 2018. To protect their health, Chinese citizens need readily available information to know how to reduce their exposure to pollutants in their daily activities. HUANG’s research on GTWR inspired the creation of a smartphone App, TouchAir, which enabled real-time air pollution monitoring in any location in China and Southeast Asia. This App did not require the construction of many monitoring stations in a region. In recognition of its significant and far-reaching social impact, the App won the Smart People Award at the Hong Kong ICT Awards 2018. According to a user: “The functions of TouchAir have helped me reduce my exposure to air pollution in my daily life and while traveling. I use it every day to check air pollution levels to avoid significantly polluted routes when driving to my workplace.”

In summary, STA and the products and services it supported had profoundly influenced urban management practices in different regions around the world and delivered both economic, health and environmental benefits to a large and growing user community.